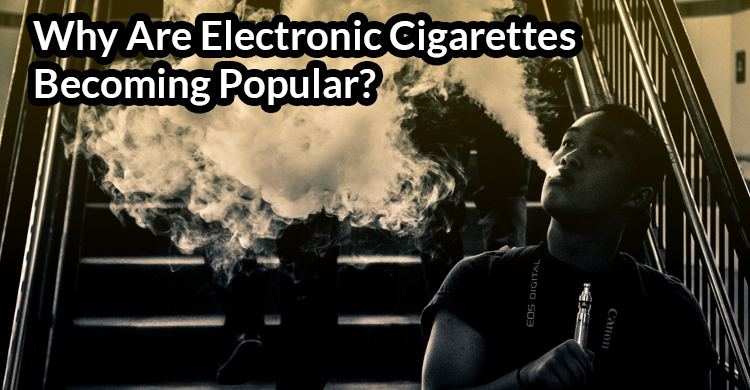 As of 2015, the vaping industry’s worth in the United States alone was already $3.7B! Electronic cigarettes are taking over traditional cigarettes amazingly fast. There are already more than 2.7 million users in the US, and every day more and more people are trying e-cigars and making the switch .

What Is An Electronic Cigarette?

Electronic cigarette, also known as e-cigarette or electronic nicotine delivery system, is the world’s novel way of smoking. China introduced e-cigars to the world market in 2004. It is different from a traditional cigarette since an e-cigar is a battery-powered device which does not get consumed like tobacco. Instead, the device vaporizes a flavored liquid which a smoker inhales.

E-cigar was invented to help smokers quit smoking. We know for a fact that smokers, and even non-smokers, get exposed to the dangers of nicotine and other toxins whenever a tobacco product is lit and consumed. Cigarette smoke contains more than 7.000 chemicals, 51 of which are carcinogenic (cancer-causing) compounds and hundreds more are poison. Nicotine is of primary health concern because it is as addictive as alcohol and cocaine.

With e-cigar, a smoker has a healthier alternative to kick the habit. Nicotine is delivered in vapor, not smoke. E-cigars also don’t contain tobacco, which is the major culprit in the various chronic illnesses that smokers often later suffer. And when we say smokers, we also refer to those innocent people who get affected through second-hand and third-hand smoking. No wonder governments impose strict regulations on the use of tobacco products.

Why Switch To Electronic Cigarettes?

Millions of smokers around the world actually want to kick the habit. But cigarette addiction is just as hard to battle as alcohol and drug addiction. It is not so controversial and hazardous as in the case of the use of prohibited drugs. But smokers are aware of the health risks not only to themselves, but to their loved ones as well. If only there’s an easier way out.

With e-cigar, you can regulate your nicotine intake. Each unit has a renewable nicotine chamber, an atomizer, and a battery that allows smokers to have almost similar experience as smoking a traditional cigarette. But LESS the risk. Nicotine chambers are available in customizable cartridges with a wide array of strengths. You can choose from no nicotine, low nicotine, medium nicotine, and standard nicotine. You can also enjoy some savings since a nicotine cartridge’s capacity is equivalent to as many as 20 cigarettes.

With e-cigars, there is also no location restriction. You don’t also suffer anymore from smoker’s breath, stained teeth, and other discomforts caused by traditional smoking. With vaping, you also get to enjoy a wide array of flavors like coffee, desserts, variety of fruits and vegetables, menthols, and beverages!

Nowadays, more and more traditional smokers around the world are turning to the taste and comfort of e-cigars. Be one of them! Kick the smoking habit the healthier way!