Traditionally, men have favored the use of cigarettes to signify their macho personas or even their status in society. The more expensive the cigarette being used, the richer the person smoking it is. The addictive component in the cigarette would usually mean that the smoker will have the habit of life. In some instances, the frequency of smoking even increased as the smoker grew older.

Recent studies however have shown that smoking cigarettes are generally bad for everyone’s health. As such, smokers have been encouraged to give up the habit. Some have even put in new activities just to be able to forget the addictive habit of smoking.

It is at this time that the idea of using vape came into practice. It was produced and advertised as a new way of smoking without the harmful side effects that smoking cigarettes has. According to its supporters, the vape allows smokers a way to stop smoking or to avoid the harmful effects of cigarette smoking. And in the wave of health-conscious populations, more and more people became hooked on the use of the vape than on the use of regular cigarettes.

A vape is a form of an electronic cigarette or e-cigarette where the user inhales vapor that has been created by the device. The creation of vapor is made possible by the use of batteries that power the vape and heats the contents of the cartridge inside the device. These cartridges are usually filled with a liquid that contains several ingredients. Most of the ingredients are made up of flavors that are chosen by the person using the vape. However, despite the fact that vaping is being touted as safer than smoking cigarettes, vapes still contain nicotine. The same ingredient found in regular cigarettes.

It has even been said by people who are against the use of the vape that these users are more likely to inhale a greater amount of nicotine than those who are smoking regular cigarettes. Vapers usually tend to practice vaping at a higher frequency because they believe that it is healthy and not addictive. In fact, some are even happy to use the vape because of the flavors inside the cartridges. These are usually the favorite flavors of the smoker and they tend to look forward to tasting it and enjoying it.

Like the cigarette, the users of the vape have also used it as a means to show their status in life. Some vape users have bought and owned vapes with ornate designs or manufactured by well – known brands and are easily seen as expensive. Flavors for the vape have also become varied and prices range higher for some special flavors.

In other cases, the effect of peer pressure has contributed to the preference of vape over the ordinary cigarette among the youth. They are seen as eagerly exchanging flavors and holding vaping parties with their friends. Some have even used their vaping abilities to showcase their talents among their friends, peers, and even the rest of society. Others have added e-cigarette or e-cig accessories to their vapes with the more expensive and limited ones being sought out and collected.

However, despite these seeming benefits of vaping, several stories have appeared about the harmful effects of vaping. Aside from the fact that it is now considered more addictive because of its nicotine content, there are also questions about what truly is inside the vapors produced when the vape heats the liquid inside the cartridges and produces vapor. Some doctors fear that these chemicals in the vapor are more harmful than the nicotine itself. This is especially worrisome considering that there are no clear studies regarding this matter.

Another reason against the use of vape and vaping is the reported cases of the vape exploding while it’s being used. In most instances, damage to the tissues of the body that was directly in contact with the vape when it exploded had been documented. One such report is a story of a teenager whose vape suddenly exploded and shattered his jaw. Some have even died because when the vape exploded, parts of the vape became shrapnel that damaged important body parts. Other vape explosions have resulted in fires that have destroyed homes and other properties.

Most vapes use lithium batteries to power it and to heat the liquid inside the cartridges. Like every other battery created, there are times when the batteries start to malfunction or to fail. When this happens, the batteries may overheat. When it overheats, superheated liquid may leak out and it will then set off a chain reaction that will create an explosion.

What is important to know is that users of the vape and buyers of e-cig accessories sometimes tend to pair the device with another device. Sometimes, these pairings of e-cig accessories are incompatible with one another. A good example is when the charger being used on the vape is not the charger that is actually compatible with it. Or the batteries being used on the vape are not the same as one another. This incompatibility produces such a disastrous result.

Moreover, it has been pointed out that the very design of the vape itself is a contributory factor to the occurrence of explosions, especially during the vaping process. Without any other way for the superheated liquid to leave the device or for the possible chain reaction to be diffused, the explosions are a sure thing.

Further, since in some instances, the batteries can easily become overheated due to overcharging, it has been advised that vape users do not leave their vapes charging overnight. This is a sure situation when users of vape tend to connect their vapes to their chargers then forget about it and only remember it in the morning when they are ready to use these devices. it can also be pointed out that since most vape users tend to interchange the chargers of their vapes and the vapes itself, incompatibility occurs.

This is when the charging apparatus delivers a higher voltage into the batteries inside the vape than what should be given to it. This contributes to the overheating of the batteries, preparing it for an explosion. Unfortunately, in some instances, these explosions actually occur when the vape users are using the e-cigarettes and e-cig accessories. At other times, the use of defective batteries has been shown to be the cause for the batteries to fail and start the chain reaction that results in the explosions.

The need for further studies regarding vapes and the vaping process has been increasingly recognized by different sectors of society. Especially the parents of teenagers who are becoming more and more hooked on vaping. These studies will finally show what are the ingredients inside the liquids in the cartridges inside the vape. It will also show with finality, what are the chemicals being produced when these liquids are heated and turned into vapors. More importantly, these studies will show the problematic mechanism or problematic part of the vape that cause the explosions. And in knowing all of these, the general population and even the vape users will finally be able to put into place safety measures that will prevent these accidents that can take a very deadly toll. 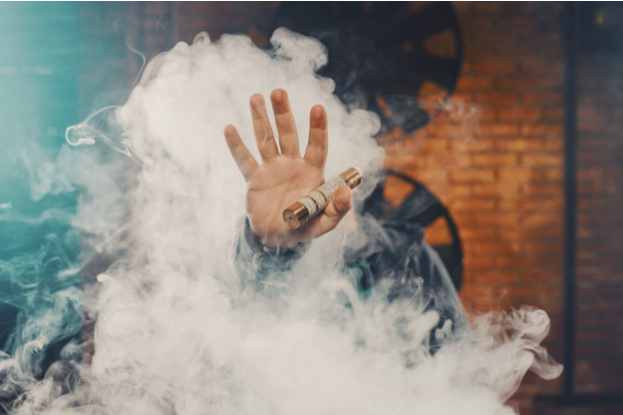