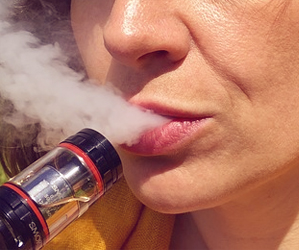 Have you ever wondered what your favorite e-liquid is made of? Ever wondered if it is safe at all or if there’s anything in it that you might need to worry about? Some smokers refuse to switch to e-cigarette likes and vaping because they believe that whatever it is they’re getting from real cigarettes, are still so much safer than smoking e-liquid vapors. Could they be right?

What’s In My E-Cig Liquid?

Your e-juice or e-liquid is a mixture that generally consists of propylene glycol, glycerin, nicotine, and flavorings. Typically, 95% of the said liquid is propylene glycol and glycerin, which are used to produce the vapor. The flavorings, meanwhile, provide that kick, taste, and aroma that all vapers love. It may be natural or artificial, and it is in the flavorings that vapers get to experiment and mix concoctions of their own to produce a unique taste. Aside from different flavors, there may also be different nicotine strengths that vapers can choose from.

Are the Ingredients Safe?

Let’s take a look at each of the main ingredients in depth to find out more.

This ingredient, by nature, is a synthetic organic compound. Physically, it is a thick and colorless liquid, almost odorless but has a faintly sweet taste to it. It is said to absorb water and is generally used to make polyester compounds. It is also known as a base for deicing solutions and is largely used by different industries in the market today as antifreeze. It is found almost everywhere from chemical, food, and pharmaceutical industries all over the globe.

As to its safety, the Food and Drug Administration (FDA) has already classified propylene glycol as “generally recognized as safe.” This means that it is acceptable for use in flavorings, drugs, cosmetics, and even as a direct food additive. It has a very low record of causing toxic effects to humans.

This substance is also known as glycerol is another thick, colorless, and odorless liquid just like Propylene. Even the taste is similar as it is also sweet. As such, it has also become a common ingredient in many food and pharmaceutical products. As for cosmetics and pharmaceutical, for example, it is said to provide moisture for the skin. Thus it is also used to treat and prevent dry, rough, and itchy skin. Even minor skin irritations, rashes, and burns can be treated. As for food, it can be used as a sweetener, but its sweetness is not as bad as real sugar for it does not cause dental cavities to humans.

Having said all that, it is apparent that the substance is safe and non-toxic.

Nicotine is a nitrogen-containing chemical that is either made by the tobacco plant (Nicotiana tabacum) or produced synthetically. It is known to have powerful pharmacologic and psychodynamic effects including but not limited to euphoria, severely increased alertness, and a sense of relaxation.

This may come as a surprise, but it is not the nicotine that causes cancer nor is it excessively harmful on its own. The only reason it got said negative connotation is because it is highly addictive. As such, when it is added to anything that has harmful effects like cigarettes, the person gets too much and unstoppable exposure to the harmful effects.

Looking at the primary ingredients, it is obvious that the verdict is that e-cigarette liquids are safe! So if you’re looking to switch from pre-filled cartridges to refillable and e-liquids, there is obviously no harm in that! Make sure, however, to purchase only from reputable suppliers, as the information above can only be true if you bought your liquid from trusted companies.