It has been quite a number of years now when e-cigarettes were introduced to the market and up until today, most people still believe that they are a better alternative to traditional tobacco smoking. This is especially true for those who have chronic obstructive pulmonary disease or COPD, as well as those individuals who are seeking to cut off their nicotine intake.

However, despite these advantages and even more, there are still a lot of inaccuracies and misapprehensions about e-cigarettes and vaping. One of the most commonly held concerns some people worry about is that it might cause a health condition called ‘popcorn lung’. Continue reading to find out more about this disease and whether it should be a concern for individuals who are looking to buy electronic cigarettes.

What is popcorn lung?

Popcorn lung, also known as bronchiolitis obliterans, is a newly found disease and is a rare condition that causes airway scarring. Because the tiny air sacs present in lungs become damaged, a person suffering from this condition may experience uncontrollable coughing, wheezing and shortness of breath. In some extreme cases, the advancement of popcorn lung symptoms may even require the patient to get a lung transplant overtime.

What are the causes?

While there are several chemicals that can cause popcorn lung and can also be triggered by certain lung infections, bronchiolitis obliterans gained its more common name ‘popcorn lung’ as it has been initially noticed among workers in a popcorn factory.

The National Institute of Occupational Safety and Health have found out that diacetyl, a flavoring agent commonly used to give popcorn its buttery taste is responsible for the said condition.

While diacetyl has been classified safe to ingest as we can also find it in beans, honey, coffee, dairy and fruits, inhaling it was claimed to be a strong contributing factor towards the development of popcorn lung. When this food chemical is heated under high pressure, such as what they do in most popcorn factories, it is believed to cause other respiratory illnesses as well and not just popcorn lung symptoms.

What are the symptoms? 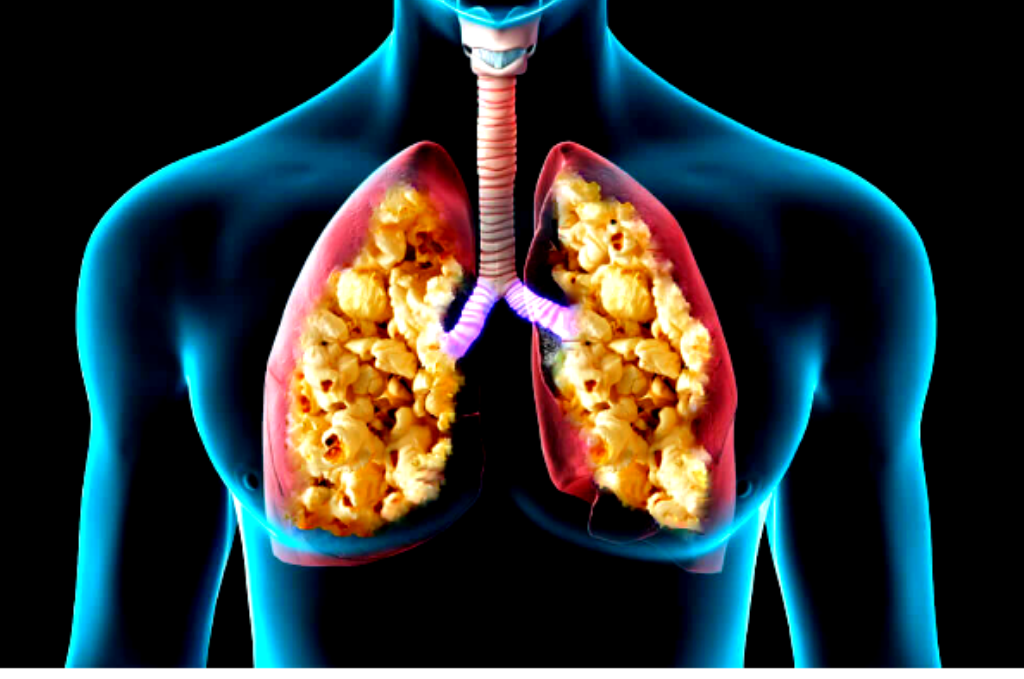 as its symptoms can be subtle and therefore easy to overlook. Indications usually occur within 2 to 8 weeks after infection or exposure to a chemical, especially to diacetyl.

Some of the most common signs and symptoms to look out for include:

Do e-cigarettes cause popcorn lung?

The concern correlating popcorn lung with vaping came about when a study showed that a lot of juices used in electronic cigarettes contain diacetyl to provide a buttery flavor. While this may be true in some e-liquid flavorings in the past, countries such as the UK has banned diacetyl as an ingredient to vape juices indefinitely.

What’s more, e-liquid production companies are now required to perform batch testing, a series of procedures that use state of the art instruments to determine an e-liquid bottle’s quantity of potentially risky chemicals like nicotine, acetyl propionyl and of course, diacetyl. Performed by accredited laboratories, batch testing helps in the detection of harmful chemicals, which can prevent subpar e-liquids from entering the market and causing adverse effects to users.

For now, research studies are still ongoing to determine the real cons and negative impacts of using electronic cigarettes in a person’s health. Until the vaping industry has more transparency and evidence in these concerns, it’s safe to continue assuming that vaping is overall, a better and much healthier option than smoking cigarettes.